Drag your cursor around the wheel.  You will see a cornucopia of benefits made possible by a regional fiber optic network. These benefits do not arise from a new network alone; more will have to be done in every area.  But a dazzling new broadband network will create opportunities around every corner in ways that cannot be matched by any other initiative. At a minimum a fiber optic network will fill in the substantial coverage gaps left by current networks, pump up real estate values, and lay the groundwork for future telemedicine facilities that our aging population will clearly need.  But what the network can do for economic development, education, and the general business of restoring our young population cannot be overstated.  We need it sooner, not later.

Our region has 76,000 homes.  Roughly 50,000 of them connect to a cable television network for Internet access at broadband rates as defined by the FCC (25 mbps downstream, 3 mbps upstream).  The balance live with DSL over telephone lines, satellite connections, or  spotty mobile coverage, none providing real broadband.  But the Coronavirus crisis has exposed the fatal weakness of cable tv Internet.  A single cable line may connect as many as 250 customers who share that line with all others.  That worked when traffic was low.  But now students are Zooming, parents are Zooming or connected to corporate centers, all at the same time.  The traffic gets so bad at times that conferences break up, telemedicine video stops working, and students have to time share the line to get decent access.  This is not broadband; this is shameful.  We have to recognize that our current system is broken.  No one has broadband in our region when the going gets rough, and it will get rough again.  It’s time for a change.

The problem with cable tv Internet is worse than just suggested. Video conferencing with Zoom requires symmetric speeds, more or less the same in both directions.  Reasonable quality video for Zoom needs 0.8 to 1.0 mbps streaming according to Zoom.  Just ten people on one line will exhaust the upstream capacity of a single cable television line.  As the network was designed for heavily asymmetric traffic—entertainment video streaming and web page building—the bandwidth allocated to upstream cannot be easily improved.  Now imagine the problem when video conferencing needs HD video, say for telemedicine interviews, with date rates around 3 mbps required.  Plan your visits carefully, for midnight or later.  On the other hand, residential networks with fiber topics have bandwidth to burn—1 gigabit in both directions—and fiber optics lines will be shared with at most sixteen users, giving each user at least 60 mbps if all are on at once, enough for 4K video or rapid uploading of files.  Fiber is the future.

The past behavior of our incumbent carriers strongly suggests that (1) they have no intention of serving the 35% of our region without broadband, (2) they have no intention of upgrading their networks to fiber optics to the home, (3) the CATV companies will not attempt to compete with each other even though they could, legally, (4) and Frontier will never be competitive in our region.  The reason is simple: there is not enough incremental revenue to justify the substantial incremental costs. So we must do what many other rural towns have done in America over the last few years. We must do it ourselves.  Our municipalities must find money–federal, state, or its own–and likely own some or all of the next generation network to bring our region up to date, and point ourselves to a more successful future.  Federal and state governments are now recognizing our problem, that we are actually unserved; some money may flow from them.  But it is more likely that we will have to find our own funding.

Three models have emerged for municipal fiber optic networks: (1) the municipality owns and operates the network, usually through a municipal electric or telephone utility and often with federal or state subsidies; (2) a private partner such as Google installs and operates a network with substantial inducements; and (3) the municipality installs and owns the wiring on the poles, a private partner installs home wiring and electronics and other network electronics. We know of only two cities that have adopted the last of these options, but it is the one most attractive to us. We do not have electric utilities, we are not getting subsidies, and our thin housing footprint makes a fully private arrangement infeasible. We need to treat networks like we treat roads.

1.For our purposes we need to think of networks divided into the following pieces: (1) fiber optic cabling on the poles or underground (no electronics, just wire): (2) drop-wire from the pole to the premises, an Optical Network Termination (ONT), other electronics, and in-house wiring; (3) an Optical Line Termination (OLT) at the other end, usually in a cluster with other electronics and often in an unmanned Hut, and (4) back-haul, fiber optic connections from the Hut to resources such as the Internet. The reason for isolating the pole wiring from electronics is that wiring without electronics can secure loans with forty year terms, whereas wire with electronics will be less than twenty.

2.We propose a three-way partnership. Municipalities will own the trunk wiring on the poles, but no electronics. One or more private organizations will install and own drop wiring and all premises electronics, and huts at the other end. We will then use the Connecticut Education Network (CEN) for back-haul. CEN has a point of presence in most if not all of our municipalities, either at a school or a library. The private partner will also provide operations and maintenance, to be paid for through Internet access fees. The private partner will also pay for lease costs from CEN and, likely but not certain, a small lease fee to the municipalities for use of its wire.

3.Municipalities will thereby get a universal fiber optic network for the least amount of funding in practical terms, with the least monthly cost per home. Private partners will incur most of its capital expense when a customer has subscribed, reducing their capital risks considerably. CEN needs more customers; if it becomes the back-haul of choice for many municipalities, it can substantially increase its services to schools, libraries, municipal departments, and other natural customers for a network that has been cut off from state funding. Furthermore, all partners have skin in the game, a good condition for working together over the long haul.

4. For reasons we explain below, we are now recommending that one or more municipalities in our region take the role of pioneer and develop a universal municipal network along these lines. Norfolk is the current candidate and is working to this end. Other municipalities are stirring; some are looking at alternatives that do not involve community funding but do not offer universal service. We are encouraging them. When a few municipalities have networks up and running, we will form a regional entity that can serve as a single point of contact for the network supplier and provide common terms for that organization. 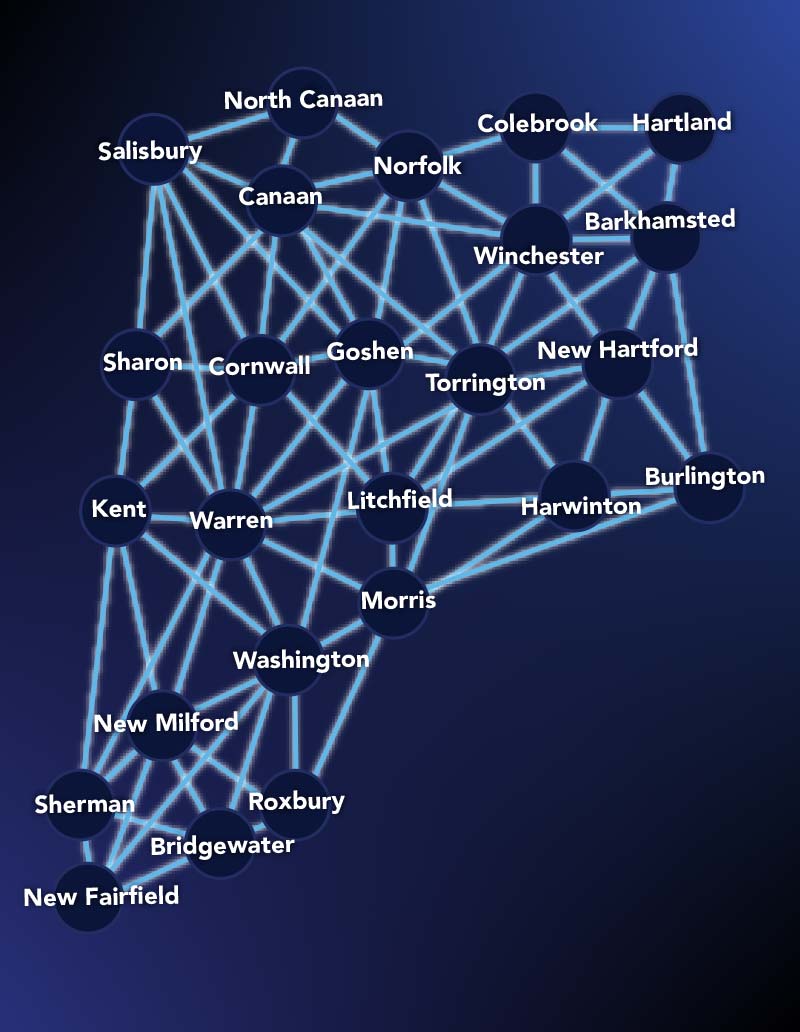 A little background first.  Our target from the beginning was a regional network over most if not all of our 25 municipalities to realize economies of scale and have enough prospective homes to attract private partners.   We got support from most elected officials in the region, but each had reservations about getting their own communities to pay the municipal share.  But we also heard from prospective partners that they would not deal with a group of individual towns, insisting instead on a single regional, independent organization with which to work.  There is no legal precedent in Connecticut for such an organization.  It was also felt by many that getting towns to agree on terms and conditions would be very difficult (read “impossible”).

We were still on this track until a May 2018 decision from the Connecticut Public Utilities Regulatory Authority (PURA) denied municipalities access to utility poles for commercial broadband networks under the one law that authorized it “for any purpose.”  That ruling has happily been overturned by a Connecticut appellate court and the law itself restored to its obvious meaning.  However, we did not expect this; we excepted a long progress through appellate stages that would last another three years.  We were happily wrong.  However, after the initial ruling it looked as if every municipality would have to construct a municipal electric utility to get access to utility poles for a broadband network (allowed under Connecticut law).  As this added complexity and more legal obstacles, we decided it would be best to get one town to forge the trail.  We chose Norfolk, which already had an electric utility initiative underway.

Having adopted this strategy we decided it was still the best under the new (as in original) conditions.  Norfolk has a team committed to the cause, a group of supporters from every corner of the town, a head start on the mechanics of community funding, the full support of its selectmen, EDC, and P&Z.  It has developed relationships with a supplier who is willing to take on such a small community.  It is working out the financial details and creating several payment scenarios.  It is targeting a community vote at this year’s municipal election in November 2020.  When this complex program has taken shape and realized its goal Norfolk will supply us with a roadmap that may be used by any other community.

Meanwhile, at least one other community is seriously exploring an option that would not require community funding, but would expense universal service, at least at the outset.  Two other communities are moving into the “we must do this” tent.  The impact of the legal congestion being cleared away will be felt by others, we believe.  Our Council of Governments (COG) is sponsoring a second round of community outreach, funded by the state, that will be able to give much more detailed expression to what we think can be done than our first round, which was largely exploratory.

Movement can also be felt on the economic development front. Under the aegis of the Rural Labs initiative and with some state funding, we are beginning to explore relationships with large corporations that would be willing to provide work-at-home privileges to people moving here.  This will have the bilateral effect of stimulating them to promote the idea within their own companies and provide for us the networking protocols related to security, speeds, and reliability they will require for access to their own data centers.  This is our best chance for increasing our young population in the near term. Others will develop as the networks develop, but this effort can be started now.

This was written in the second week of January 2020.  We will update this section as we have definitive news to report.